Americans, by a margin of more than 3 to 1, expect the housing market to improve over the next 12 months, part of a broader brightening in their outlook for the economy, according to a Bloomberg National Poll. 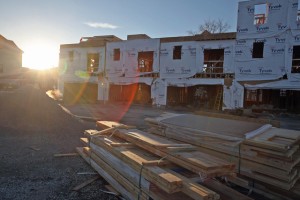 Prices are very steadily, slowly, starting to creep back up,” says Eric Matheny, 31, an attorney from Fort Lauderdale,Florida, who purchased a new home five months ago. “The housing market is a major part of the economy, so it says something about the strength of the economy.”

The S&P/Case-Shiller 20-city index rose 5.5 percent in the 12 months to November, the biggest year-over-year gain since August 2006. In January, homebuilders began work on 613,000 single-family homes, the most since July 2008, the U.S. Commerce Department said yesterday.

As the housing market, the epicenter of the 2008 financial crisis, continues healing, Americans say they expect its improvement to spread through the economy, according to the poll of 1,003 adults conducted Feb. 15-18.

By a margin of 43 percent to 26 percent, respondents say prospects for job growth will rise over the next 12 months, with 30 percent seeing little change; 37 percent anticipate a stronger economy compared with 25 percent who disagree and 37 percent who say it will be about the same.

Susan Kosko, 43, a risk-management assistant in ruralPennsylvania, says she feels “a tiny bit” better about the economy thanks to rising home prices in her area and lowinterest rates.

“The deficit is a big concern,” she adds via e-mail.

On several other measures of economic well-being that Bloomberg has tracked over time, the share of poll respondents saying they expect improvement rose from December.

Asked about overall financial security, 32 percent say they expect their situation to get better compared with 14 percent who see tougher times ahead and 48 percent seeing little change.

There’s also an increase in the share of respondents saying the market value of their homes will rise, with 27 percent expecting higher prices compared with 16 percent who anticipate falling values and 34 percent saying they’ll be about the same. In December, Americans were evenly split, with 20 percent predicting higher prices and 20 percent lower prices.

By a margin of 49 percent to 37 percent, Americans say they feel they’re moving closer to their career and financial goals.

“We’re every year getting closer and closer,” says Matheny. “I’ve got a good work ethic and I put my heart and soul into my job.”

Still, more than three years after the end of the 2007-09 recession, concerns remain. Asked about having enough disposable income to make large household purchases, 29 percent say they expect more difficulty in the coming year compared with 19 percent who plan to loosen their belts.

The economy will grow 1.8 percent this year, according to the median forecast of economists surveyed by Bloomberg.

With the stock market close to regaining its pre-crisis peak, respondents expect betterinvestment performance by a margin of 23 percent to 18 percent, with 34 percent seeing little change.

Bob Magera, 63, a part-time pharmaceutical salesman in Myrtle Beach, South Carolina, says his 401(k) retirement accounts lost about 50 percent of their value during the financial crisis.

The outlook isn’t without clouds. President Barack Obama continues to get a failing grade from a plurality of respondents on the question of “making people like me feel more economically secure.” By 48 percent to 45 percent, respondents disapprove of the president’s performance on that issue.

Washington’s chronic showdowns over government spending also have left Americans worried about the impact of political dysfunction on retirement programs such as Social Security and Medicare. And by 46 percent to 10 percent, those surveyed expect their federal tax bills to rise in the coming year.

Thirty-nine percent of Americans are skeptical that Medicare will be around when they need it, while 57 percent say the health-insurance program for the elderly will definitely or probably be there.

“Unless we get this deficit under control and unless we get spending under control, I don’t think they’ll be around in five or six years,” says Grannan. “Sooner or later, those people we elected better get along and do something before this country falls apart.”

The poll also finds concern over the prospects for the U.S.’s global standing. Since the financial crisis erupted in the fourth quarter of 2008, the Chinese economy has grown at an average annual rate of 8.9 percent compared with 0.6 percent for the U.S., according to data compiled by Bloomberg.

In the poll, 35 percent say the country’s standing in the world will get worse over the next 12 months while 26 percent say it will improve. An additional 37 percent expect it to remain unchanged.

The Bloomberg National Poll was conducted by Selzer & Co., a Des Moines, Iowa-based pollster. It has a margin of error of plus or minus 3.1 percentage points.

To contact the reporter on this story: David J. Lynch in Washington at dlynch27@bloomberg.net

To contact the editor responsible for this story: Cesca Antonelli at fantonelli@bloomberg.net